If your childhood was anything like mine, the only Brussels sprouts you ever saw were out of a can. Zero flavor and slimy texture. Yuck! I vividly remember being forced to eat canned Brussels sprouts, right alongside canned spinach. Sheer torture to a child. And probably to most adults, as well. Those were the days when you had to eat everything on your plate, in honor of the starving children around the world. What sort of logic was that anyway?!!!

And I don’t care how many times we were told we could be strong like Popeye if we would eat our spinach. I could not bring myself to eat that stuff, no matter the consequence. Why couldn’t my parents figure out how to make these two foods at least mildly palatable? I have often wondered if kids in other parts of the country were being served delightful renditions of freshly prepared vegetables while we were choking down our canned vegetables.

We’ve come a long way and spinach and Brussels sprouts are now some of my favorite veggies. I have found that roasting Brussels sprouts is a game changer. Saute sprouts in some olive oil, balsamic vinegar, capers, roast and then top with bacon, crumbled feta (or goat)cheese, pine or pecan nuts, dried cranberries and golden raisins. Delicious! Believe me when I say this recipe has converted many friends and family who claim to hate Brussels sprouts.

When a friend reached out over Facebook the other day, asking for this recipe she remembered fondly from several years ago, I realized I had neglected to post my recipe for Roasted Brussels Sprouts on my site. Here it is, just in time for the holidays! And it is just as good reheated the next day. Trust me.

The inspiration recipe is called Bumped Up Brussels Sprouts from Guy Fieri but I have made enough modifications over the years to go ahead and create my own recipe for Roasted Brussels Sprouts. Enjoy! 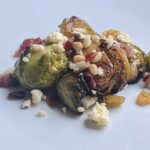