Contrary to what this site may lead you to believe, I’m not a big dessert person. Extravagant desserts are for extravagant occasions, those celebrations that lend themselves to that final flourish of decadence. Although Big Country says I would celebrate Potato Day, if there was such a thing, and he may have a point.

A small(ish) daily dose of dark chocolate satisfies my sweet tooth pretty well. Well, that and the occasional Coca Cola, served in a glass with ice and a squeeze of lime.

That said, I do love a homemade Boston Cream Pie, the official state dessert of Massachusetts. I don’t know what it is about the combination of simple white cake, rich vanilla custard and ganache but it works for me. It’s not cloyingly sweet so it plates beautifully for breakfast alongside a good cup of coffee.

Although I have simplified it a bit, I’ve been making my Boston Cream Pie based on a recipe I found on Food Network quite a few years ago. I usually only make it on my birthday, because…why not? Who else is going to make me a cake, let alone a Boston Cream Pie? This year, I did not make my birthday cake for some reason that I can’t seem to remember and I really missed it. So I made it for Mother’s Day instead because again…why not?

It’s definitely not a one-bowl kind of recipe but rather a 3-parter and the custard does require constant attention lest it start to burn on the bottom, which I’ve done. (Note to self: you cannot save custard that has been burned so you will have to throw it out and start all over if that happens.) Also, you need to start it a day ahead so there’s that.

Some recipes are worth the effort and when you pull this Boston Cream Pie out of the fridge the next morning and sink your fork into it, you will be so glad you went to the trouble! I promise.

Happy Mother’s Day from me to you! Please have your cake and eat it too! 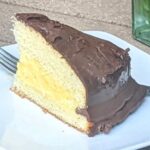